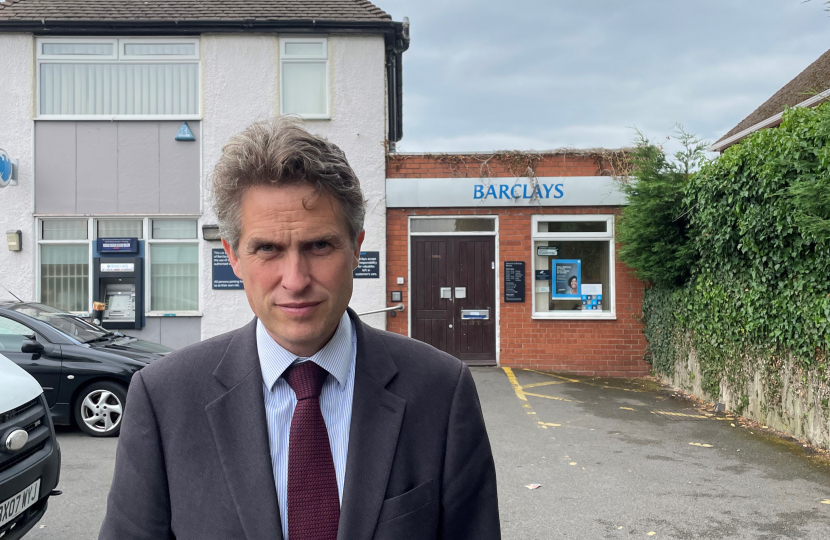 Sir Gavin Williamson, MP for South Staffordshire, is campaigning with Bilbrook residents to keep their Barclays branch open after the bank announced plans to close the branch by October.

Barclays set out their plans to close the branch by Friday 14th October, citing changing banking habits and reduced counter transactions as the reasons for the proposed closure.

However, Bilbrook residents have reacted icily to the news as the nearest Barclays branch following the closure will be several miles away in Wolverhampton.

Sir Gavin said: “I was shocked and disappointed to hear about Barclays’ plans to close their Bilbrook branch, particularly after promising to protect branches in areas like Bilbrook just two years ago. I have requested an urgent meeting with Barclays to persuade them to reconsider and keep the branch open.

“While banking habits have undoubtedly changed over the years, I firmly believe that branches remain a vital lifeline for elderly and vulnerable people. Being able to speak to an advisor in person provides them with the security, ease, and confidence that everyone needs when they are managing their financial affairs.

“As such, I have decided to launch a survey of Bilbrook residents to demonstrate the scale of local support for this Branch. I would encourage all residents to keep an eye out for this survey as it is distributed over the coming weeks so that they can have their voices heard.”