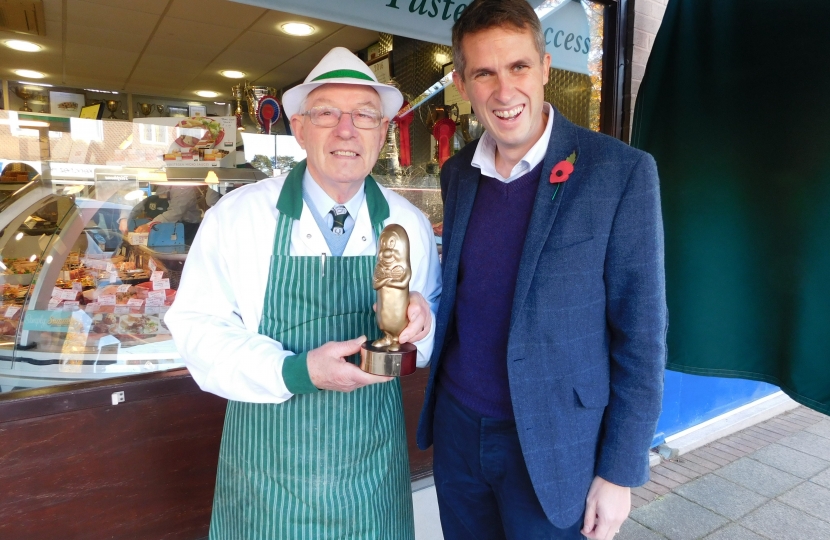 Gavin Williamson, MP for South Staffordshire, has congratulated Codsall butcher Allan Bennett on his recent award for services to the sausage industry.

Gavin visited Allan Bennett in his Station Road shop to congratulate him on winning The David Black Award for services to the sausage industry.

The Award, which has been presented annually since 1960, was instigated by the East Anglian pig producer after whom it is named. It is the highest award the pig industry has to give and is presented to an individual who has made a valuable contribution to the industry over a

Allan Bennett started his career as a schoolboy helping the local butcher with deliveries by the butcher's bike. A long association with the Meat Industry had started when he joined Gills in 1953 and quickly rose through the ranks from shop floor to eventually become Managing Director of the Company and buying all 4 of the shops.

He sources all of his meat from local markets and farms and produces everything himself including- sausages, pies, bacon and black pudding. He joined the Q Guild in 1991 and to date he is the most successful of any of any of the Q Guild businesses in the Smithfield awards, accumulating over 160 Gold awards and several Diamond awards.

Allan now works alongside his son Steven Bennett in his Codsall shop on Station Road. The David Black Award follows a long line of accolades for the butchers shop including the NFMFT National Pork Pie Champion 2016, Butchers Shop of the year, lifetime achievement winner, National Federation of Sausage Champion to name but a few.

Commenting on Allan’s award Gavin said: “I was so delighted to hear about Allan’s recent David Black Award for services to the sausage industry. This is absolutely deserved after such a stellar career producing some of the best products here in Codsall.

“Once again this proves that here in South Staffordshire we have the best butchers anywhere in the country. I would like to offer Allan and all staff at Allan Bennett Butchers, many congratulations on this extremely well-deserved award for some of the finest produce in this country.”