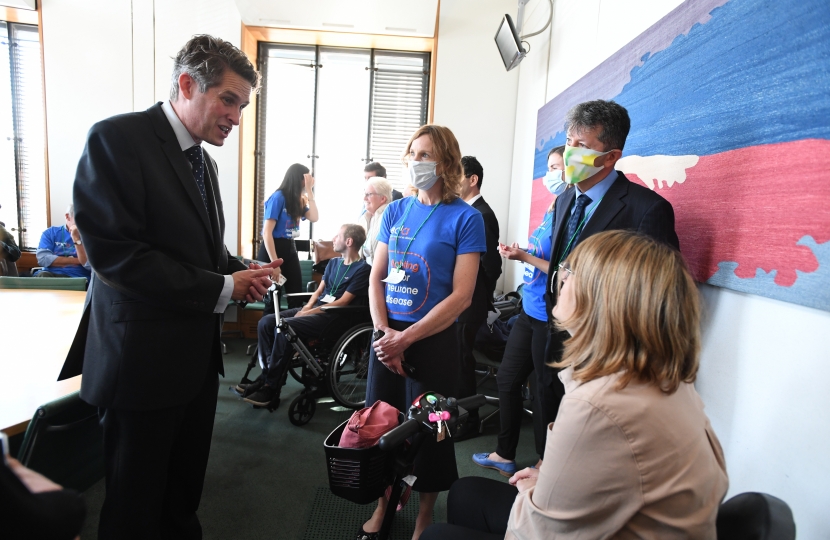 As former Chair of the APPG on MND, the MP for South Staffordshire was invited to attend a reception in Parliament on Tuesday, the 20th of September organised by a coalition of charities including the Motor Neurone Disease Association (MNDA). The reception hosted a group of people with motor neurone disease and MPs, which also counted with the presence of rugby league legend Rob Burrow, who also suffers from the condition.

The Motor Neurone Disease Association (MNDA) focuses on improving access to care, research and campaigning for those people living with or affected by motor neurone disease in England, Wales and Northern Ireland. Motor neurone disease (MND) is a condition that affects the brain and nerves called motor neurones causing them to gradually stop working. There is currently no cure for MND, but there are treatments to help reduce the impact it has on a person's daily life and research for a cure is underway.

Gavin said: “As former Chair of the APPG on MND, helping make the lives of people with motor neurone disease easier and more comfortable is a cause very close to my heart. When we first started raising awareness for the disease ten years ago, it was all about getting everyone chairs, now the goal is to find a cure. Nothing makes me happier than to think of how far we have come, how far science has come, and more optimistic as to what we can achieve.”