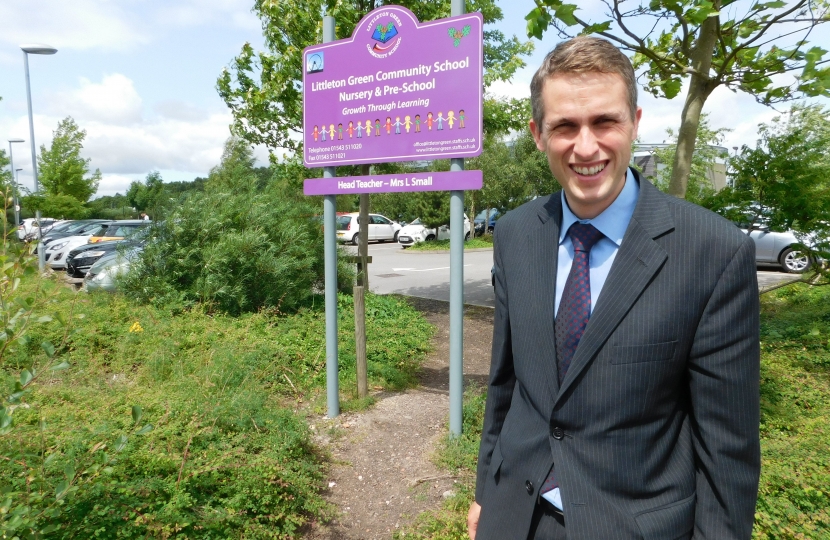 Gavin Williamson, MP for South Staffordshire, has welcomed the two stage consultation of the fairer funding formula for schools that has been launched.

Under proposals published for consultation today the government has started the process of introducing a national funding formula from 2017-18. This represents an important move towards a system where school funding is allocated on a consistent national formula. As part of this, local authorities will receive funding to help with their responsibilities towards young people with high-level special educational needs on a fair and formulaic basis, so that no pupil is disadvantaged simply by where they live.

The plans outlined today will ensure:

The Secretary of State for Education Nicky Morgan MP said: “We want every school in England to get the funding it deserves, so that all children – whatever their background and wherever they live in the country – get a great education.

This is a key part of our core mission to extend opportunity to all children and provide educational excellence in all parts of the country: rural and urban, shire and metropolitan, north and south.”

Local authorities will continue to play a vital role in the distribution of high needs funding as they are best placed to make important local decisions about children with special educational needs and disabilities.”

Commenting on the start of the process Gavin said: “This is excellent news for schools in South Staffordshire. The current system for distributing that funding is outdated, inefficient and unfair, with schools missing out on vital funds because of postcode.

“I am delighted that the government will be making these monumental changes. Providing educational excellence everywhere is a key part of the government’s mission to extend opportunity to every child. This includes delivering on the manifesto commitment to protect the core schools budget. This will be over £40billion next year, including the pupil premium - funding worth £2.5 billion a year targeted at the most disadvantaged pupils. This is the highest ever level of funding for schools of any government and I am so pleased that the two stage consultation of the fairer funding formula for schools has now begun.”