Gavin welcomes rejection of second round of DX proposals 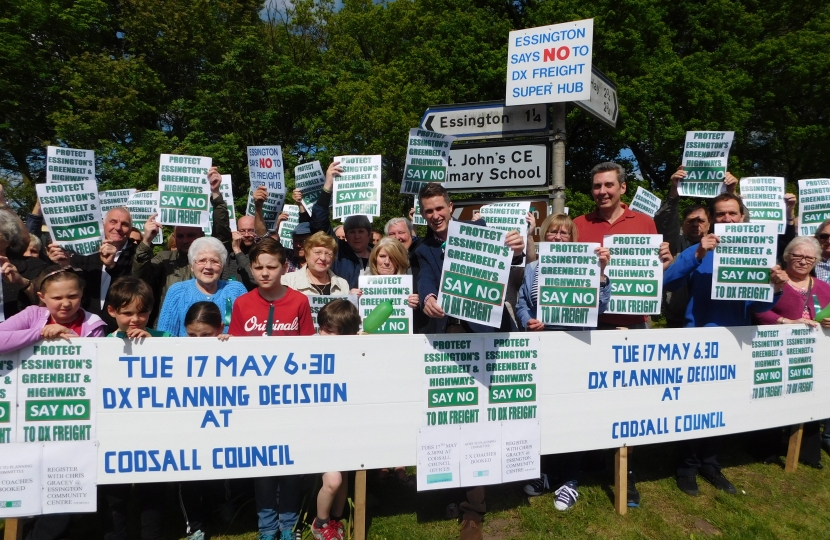 Gavin Williamson, MP for South Staffordshire, has welcomed the news that following a meeting of the Council on Tuesday evening that a second round of proposals for a DX Freight Super Hub in Essington have been rejected.

The proposals for the site on Hobnock road were thrown out for the second time after a meeting by the Planning Committee of South Staffordshire Council. Councillors vote 27 against the plans, with 15 in favour and one abstention.

Councillors argued that the second lot of proposals for the development were inappropriate for green belt land, would cause an increase in traffic congestion and air pollution in the village.

Gavin has worked with Essington residents throughout the campaign, holding a referendum of the 2000 households across Essington. 99% of residents who answered the survey were against the proposals for the site.

After hearing the plans were rejected Gavin said: “I am absolutely delighted that Councillors voted to reject these proposals once again last night. The proposals would have undoubtedly had a huge impact on the quality of life of Essington residents.

“By granting planning permission to the site, HGVs and other vehicles would have caused massive traffic and pollution problems, not only affecting Essington but many of our surrounding villages and causing untold damage to our green belt land.

“This is a fantastic victory for Essington residents I would like to extend a huge thank you to all those in and around Essington who put so much effort and worked so hard on this long running campaign and once again got this brilliant result.”