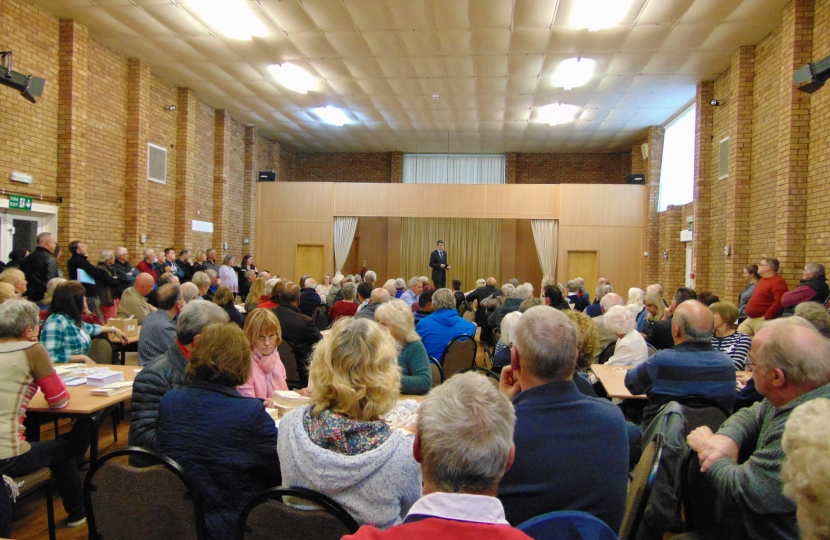 Gavin Williamson, MP for South Staffordshire, held a campaign evening in Coven for campaigners against the building of the West Midlands Interchange Rail Freight Hub in Four Ashes.

The meeting, which was held at Coven Memorial Hall, on Friday evening, saw over 200 volunteers organise the referendum and survey forms that will be then distributed to households right across the affected area.

Just over 3,000 pieces of campaign literature were organised by the team of volunteers. The combined referendum and survey will highlight concerns of residents in Brewood, Coven, Coven Heath, Calf Heath, Hatherton and Four Ashes, questioning the building of the West Midlands Interchange, the results of which will be presented to Planning Inspectorate.

Speaking at the meeting Gavin said: “I would like to say a huge thank you to all those who took the time to come to the campaign evening on Friday to help organise the survey and referendum forms and campaign material that will be sent out across areas that will be affected by the building of the WMI

“These proposals could cause irrevocable damage to our villages and I am determined to fight these proposals. It was fantastic to see so many volunteers come out to help which just shows the determination of residents to fights against these monstrous proposals which completely disregards the importance of our green belt land.

“I would encourage all residents to fill in the referendum and survey form and return it via the freepost envelope. We can only make a difference if we get actively involved and ensure those who want to destroy 618 acres of our land hear our voices loud and clear.”