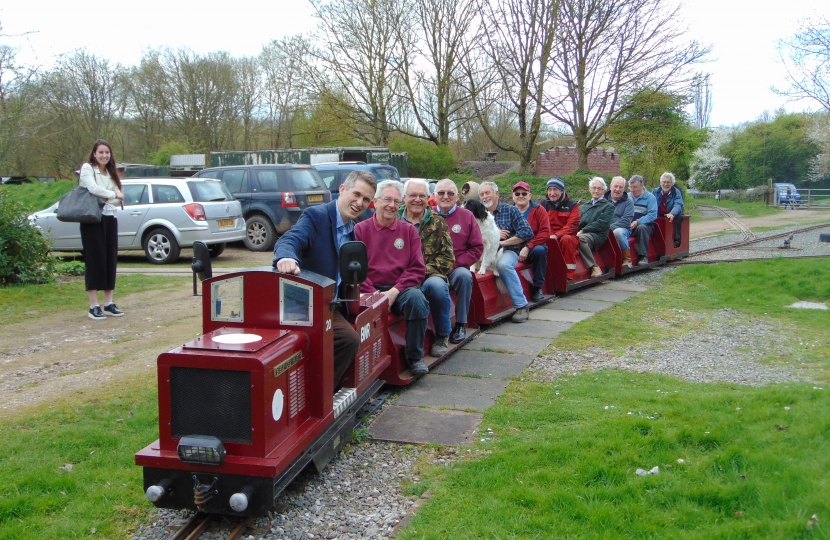 The Baggeridge Miniature Railway is operated by Wolverhampton and District Model Engineering Society (WDMES). The society currently has around 60 members who all have backgrounds and interesting relating to engineering and Wolverhampton’s industrial heritage.

Gavin met with the members of the society and spoke to them about their work, including their plans to expand the track, and was given the opportunity to ride the train.

The railway was recently in receipt of a donation of bricks by David Wilson Homes Mercia, which will go towards the first phase of their extension. This will include the building of a new tunnel and the doubling the track around the existing circuit. Members of the society also wish to get more community members involved in the miniature railway by building a community house as part of the attraction. Each summer the WDMES donates all money from the railway to a local charity.

On his visit Gavin commented: “The Baggeridge Miniature Railway is a brilliant local tourist attraction and I would like to thank each member of the Wolverhampton and District Model Engineering Society on their work in the local community promoting this fantastic project.

“I know how much the donation of the building materials from David Wilson Homes Mercia will benefit their expansion plans. It is clear from speaking to members of the society the pride and passion that they have for both the railway and Wolverhampton’s industrial past and that is something that we should celebrate.”