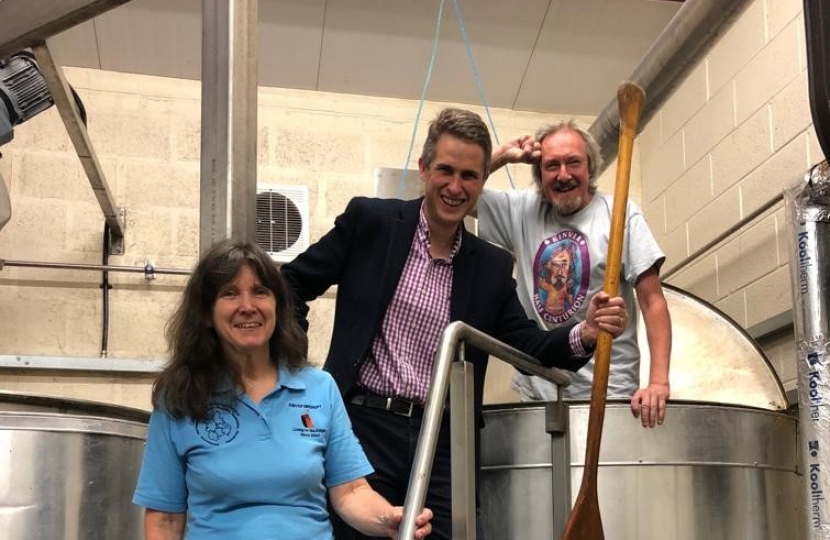 Gavin Williamson, MP for South Staffordshire, visited Kinver Brewery recently. During his visit, he spoke with several of the people who work there and he also enjoyed a look round the facilities.

Kinver Brewery is an award winning independent brewery located just outside the centre of Kinver. It was set up in 2004 and has gone from strength to strength, with a move of their premises in 2012 providing them with the opportunity to grow and expand their business. They have won a large number of awards, including the ‘Champion Beer of the West Midlands’ in both 2012 and 2013. They also won the Gold Medal Champion Winter Beer of Great Britain in 2014 in the barley, wine and strong old ale category for their ‘Over the Edge’ beer, which is extremely popular in South Staffordshire.

Commenting on the visit, Gavin stated ‘I thoroughly enjoyed my visit to Kinver Brewery the other day. It was a real pleasure to be able to catch up with the people who work there and hear about some of the work that they have been recently doing. They contribute so much to our local community and I am so proud that a local business has done so much to represent Kinver and, more widely, South Staffordshire on the national stage. It is fascinating to see and hear how the brewery works and I was so impressed with all the hard work the staff consistently put in. The many awards they have won and well and truly deserved!'

Gavin Williamson, MP for South Staffordshire, has condemned the senseless attack on the Sainsbury’s supermarket in Perton.

Police were called to the supermarket in the early hours this morning after a man had been reported smashing the windows of the store.