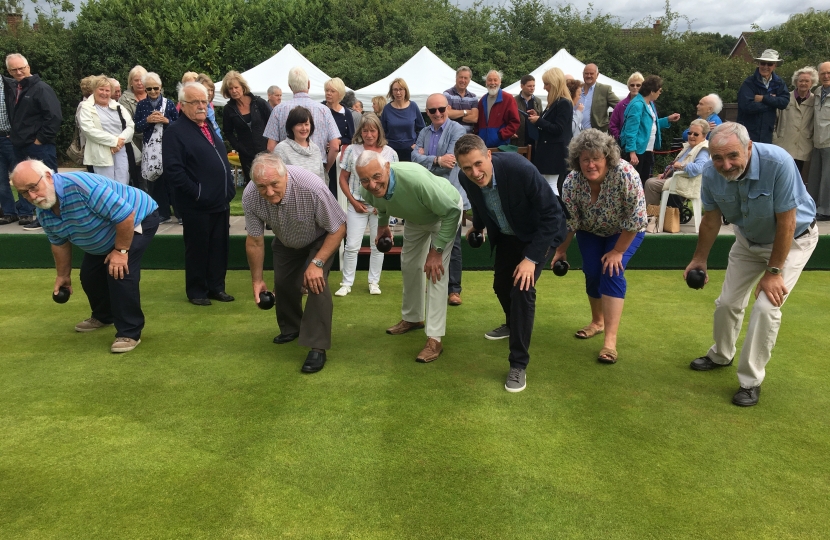 The Brewood Bowling Club committee have worked tirelessly to establish a new bowling club. In 2014, planning permission was approved by Brewood and Coven Parish Council and the planning committee have been working hard ever since to receive further funding. They have hosted variety of activities and events including a cabaret evening, a curling night, a casino evening, and prize draws.

At the event, the Club’s chairman, Bernard Rogers, did a short speech on how he and group of dedicated individuals have worked extremely hard to create the club and have never given up on their dream. He then presented an inscribed brick to mark the day which stated “Brewood Bowling Club Green opened by Gavin Williamson MP 29th July 2017”. Following this, Cllr Linda Tomkins representing Brewood and Coven Parish Council presented the club with a £5000 cheque.

To declare the Club officially open, Gavin said a few words about the work the committee have done, cut the ribbon, and then took the first ever bowl.

Commenting on the day, Gavin said: “I am so incredibly happy that the new and improved Brewood Bowling Club is now officially open after years of hard work and dedication. Alongside support from Brewood and Coven Parish Council, local residents and Veolia, the committee have never given up on their vision and it was great to see the result of all their hard work after years of fundraising and planning.

The club looks so fantastic and incredibly immaculate, and I know that local residents will be very grateful that such an excellent facility is available to them. It was wonderful to officially open it on Saturday and it was clear that residents were so proud of the work that has been done. I look forward to visiting in the near future and I encourage residents to visit in their free time”.