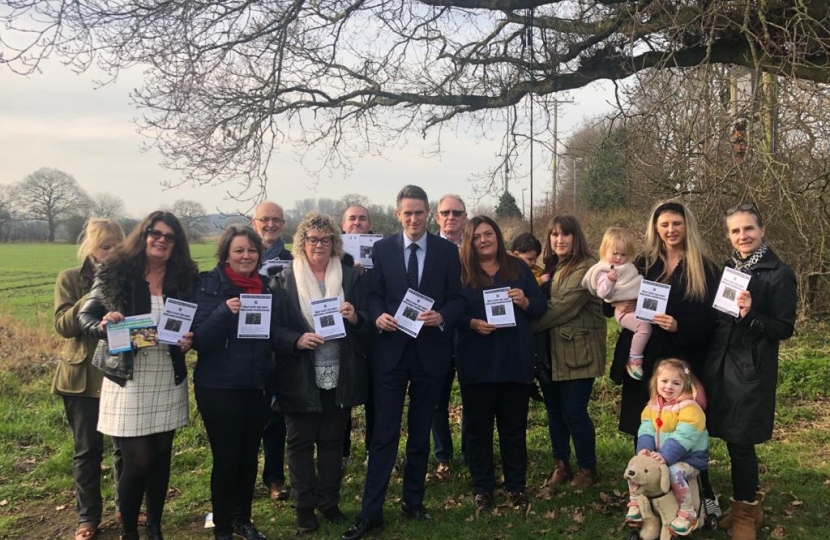 Gavin Williamson, MP for South Staffordshire, has launched a petition to stop proposed plans for the Rail Freight Hub to be built in Gailey.

The proposed site for the development, is just off the A449 and A5 and is parallel to Junction 12 of the M6. The proposals have been met with anger from neighbouring residents and developers have faced backlash over the project, which is expected to see an extra 18,000 vehicles a day on surrounding roads.

With the decision date on 27th February approaching, petitions have been delivered to areas within South Staffordshire that will be most affected by the projected 643-acre site. Brewood, Coven, Four Ashes, Calf Heath and Coven Heath have all received petitions over the last week, with many hundreds being returned within the first three days.

Lead campaigner Donna Gilmartin, has been working closely with Gavin to ensure that these proposals are rejected.

After the meeting, Gavin said: “It is great to stand side by side Donna and the other campaigners who have fought so heroically to prevent the Rail Freight Hub going ahead. I’ve long campaigned to prevent this going ahead and we will keep fighting to see this proposal rejected”.

Donna, who heads up the ‘Snub the Hub’ campaign, said: “We sincerely thank Gavin for his support as we are near to the decision of this four-year campaign against the West Midlands Interchange being built. It will be a travesty if this development is given consent in this area. It is clearly the wrong location, it’s on greenbelt land and we are convinced that if this does go ahead, the rail terminal will never be built”.

The Planning Inspectorate have concluded their findings, meaning a decision will be made by 27th February of this year.

Gavin Williamson, MP for South Staffordshire, visited a Community Speedwatch team in Lower Penn to see how plans can be created to prevent speeding in dangerous areas.