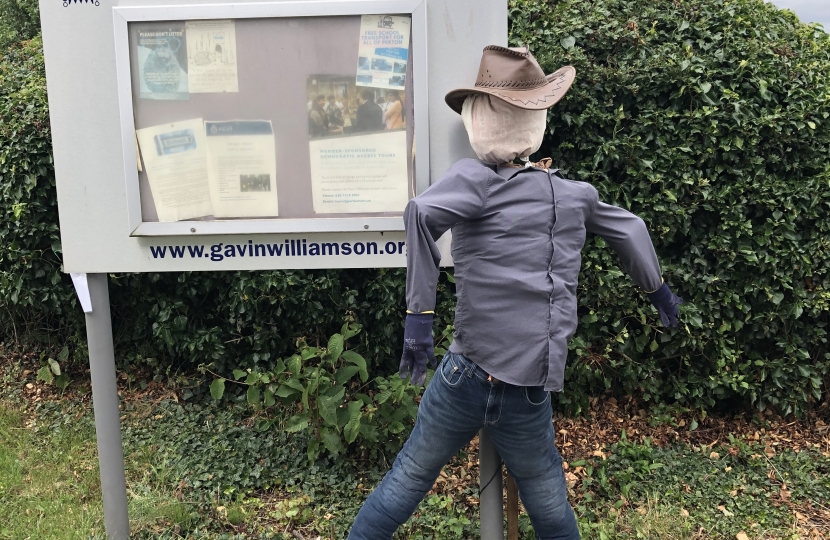 Gavin Williamson, MP for South Staffordshire, has expressed his pleasure over the community spirit shown by residents in Bilbrook and Codsall who have took part in the scarecrow competition.

Gavin’s office was asked by organiser Miranda Askwith to take part in the competition, which has saw over 80 scarecrows entered. Miranda, organised the raffle alongside EJ Edwards and Stuart Bailey to uplift the villages during the pandemic.

The competition was set to end in April, but due to the popularity it was extended until June 30. Raffle prizes have been donated by various businesses throughout Bilbrook and Codsall. The scarecrow outside Gavin’s office will be there for the next seven days.

You can still purchase raffle tickets from Motorworld in Bilbrook or Drinks Express in Codsall. All the money raised will be donated to charitable organisations, with the Bilbrook and Codsall Facebook group to decide which charity via an online poll.

Raffle tickets are £1 per strip and will running until the 15thof July.

Organiser, Miranda Askwith, said: “I have to say both Bilbrook and Codsall have done themselves proud. We can't thank enough not only the entrants but the local businesses who many despite lockdown have still managed to support our cause and have been most generous with donating prizes. The community spirit everyone has shown is truly inspiring especially in this difficult time. I am truly grateful to be part of these wonderful village”.