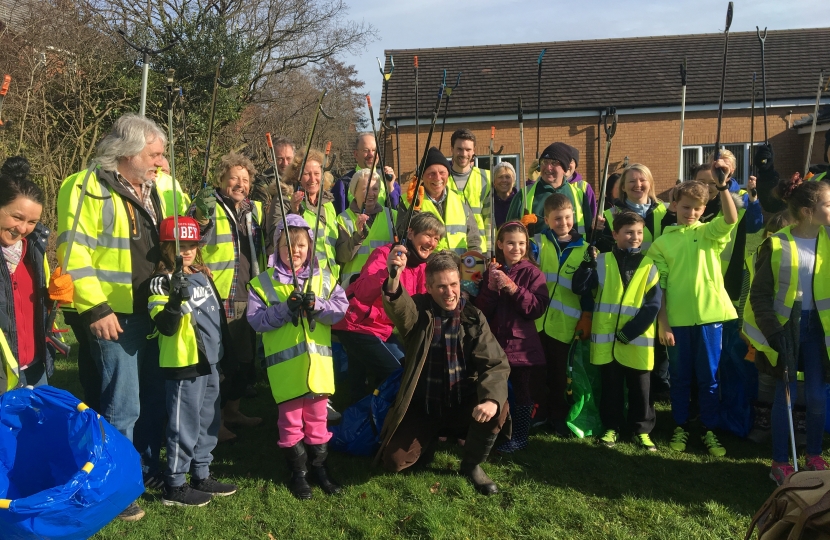 Gavin joined the annual community litter pick which was organised by Friends of Essington and supported by over 100 residents including pupils from local schools and members of the 1st Essington Scout and Guides.

A significant amount of litter was collected from around the village, which was then taken back to the Scout and Guide HQ ready for collection by the Street Scene Department of South Staffordshire Council to be recycled. Refreshments were provided afterwards by volunteers for those who took part in the event.

Following the success of the Clean for The Queen event last year, The Great British Spring Clean has brought together many of the anti-litter organisations in the UK, supported by a number of successful companies including Costa Coffee, McDonald’s and LIDL.

Community groups including parish councils, residents’ associations, girl guides and brownies and scout and cub troops were encouraged to organise their own litter pick over the campaign’s big clean weekend that took place between 3rd and 5th March.

After the event Gavin commented: “It was great to get involved once again with this fantastic event. A huge thank you to all who organised and helped out on Saturday. It was wonderful to see so many residents to come out and support Friends of Essington who do so much to support Essington residents and make the village such a great place to live.

“The Great British Spring Clean is important to bring people to go out and clean up their communities. It costs our Councils so much money clearing up litter from our streets. I hope that events like this inspire residents to encourage others to keep our streets, parks and spaces clean.”