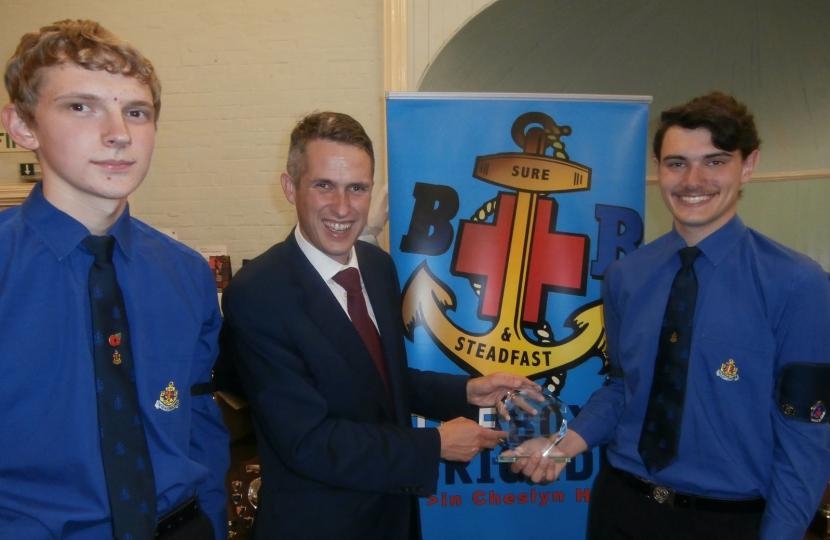 The Boys’ Brigade, based at the Salem Methodist Church, excel in engaging young people to take part in programmes to develop their potential, as well as working to improve the local community. Throughout the year, the group organise a series of award schemes including the Duke of Edinburgh Award, as well as arranging charity events and group trips. Most recently, the group were part of the National Masterteam Finals held in Antrim, Northern Ireland and finished third in the UK, as well taking part in the National Chess competition where they finished second in the UK.

Without a doubt, the past year has been incredibly promising for the group and the awards evening held on Friday was to honour the hard work and dedication that young members have shown.

At the event, Gavin had the honour of presenting the ‘Smartest Lad Award’ to a member, as well as presenting a gift to David Slater, the group's former Captain, who recently retired after 47 years working with the group. The award was to commemorate David’s hard work and dedication, as well as celebrating the impact he has had on young members as a positive role model.

Commenting on the evening, Gavin said: “It was an absolute delight to have the honour of presenting trophies to members of the Cheslyn Hay Boys’ Brigade on Friday. It is incredibly heart-warming to see how young members are making an effort to improve their local community, as well as working to enhance their skills and confidence.

“I also really enjoyed having the opportunity to congratulate David Slater, the group’s former captain, who has invested 47 years into running the group. His work has had an enormous impact on both current and former members of the group, as well as the local community. I wish him all the best in the future and hope that his work encourages others to volunteer"

To learn about the work that the Boys’ Brigade do in Cheslyn Hay, or to get involved, please visit http://1cheslynhay.boys-brigade.org.uk/.